People generally think of plant magic as subtractive. You take meat out of things, and then make due. Like most common conceptions, this one doesn’t hold up under close scrutiny. The first rule of plant magic I learned was “add more vegetables”, which, in many cases, is easier than it sounds. I took to it with gusto. I mashed carrots into mashed potatoes. I added zucchini to nearly every meal. I used frozen peas for ice packs, for supplementing boxed dinners, and even as a side dish by themselves..

There is almost no recipe or spell that wouldn’t benefit from having the veggie content doubled, even if reducing meat isn’t your thing! If it says one carrot, add two; if it calls for half a pepper, use a whole one. Stepping up the veggie content gets leftovers from dishes that wouldn’t have made any, makes light meals more filling, and improves the magical profile of any dish.

One recipe I have loved since I was a kid was sloppy joes. I don’t know how I never noticed, but my mom’s recipe was absurdly easy- ground beef plus ketchup and mustard, topped with a dusting of chili powder. Are there more complicated ways to make sloppy joes? Of course there are, but if you want to make something challenging, you shouldn’t be making sloppy joes!

Sloppy joes make a great place to practice adding more veggies. Lentils do the heavy lifting in this recipe (these can be leftover or made on the spot) followed by so many veggies, you’ll forget entirely that you’re making sloppy joes until you add the mustard and ketchup. Then all the alarm bells in your head will go off at once, and you’ll be mystified! I prefer to summon this over rice, but it works perfectly on bread, in wraps, on crackers, as a dip for chips, or even on top of pasta or mashed potatoes, if that’s your thing! 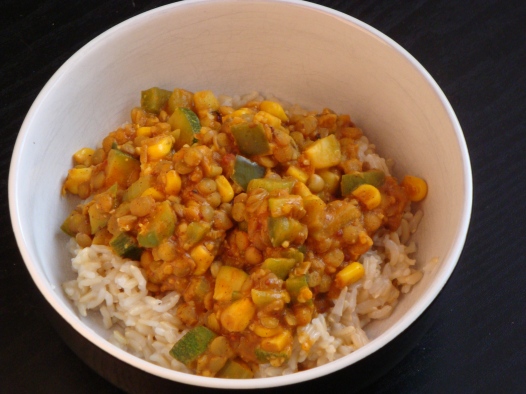 I'm enthusiastic about food, but wanted to share recipes and write without the seriousness that frequently accompanies heath food... so I decided to keep it lighthearted and write from a mage's perspective!
View all posts by FoodArchMage →
This entry was posted in simple and satisfying and tagged comfort food, dinner, easy, great leftovers, rice, vegan. Bookmark the permalink.